Li "Lily" Xiao: Double Ninth Festival in China
Madhu Jain: A Fun Childhood
In my childhood, I was a very naughty person. I used to play at the river near my house. I used to play jump-roping, hide-and-seek, and temple sightseeing. My farmer used to harvest mangoes on his farm and we would visit his farm. All of my family, friends and relatives would gather for parties and enjoy picnic time. We did not have a television or radio but I enjoyed playing board games such as Ludo, Snake-and-ladder, and carrom-board games. I used to help my parents in household chores. I learned embroidery, knitting and sewing as a child. It was a fun childhood.
Maria Castro: Childhood Memories
Natia Samkanashvili: Then And Now
I used to live in Georgia Republic. Georgia, which is in Eastern Europe.
I used to work in a bank.
I used to drive a black car.
I used to play the piano and now I do not.
I used to have blonde hair and now I have black hair.
I used to learn Italian and now I do not.
Silvana Avalos: Street Children

Lupe Carvajal: Childhood Memories from Ecuador
I remember in my childhood, my father put me in a religious school. I cried a lot because I missed my brothers. I LIVED AT THE SCHOOL! After a few months, my life CHANGED. I became used to it because they taught us crafts and also music. I learned to play piano and guitar. I had a very beautiful childhood and adolescence. I remember my teachers with pleasure. Much of what I learned I applied with my own family. I feel very proud and grateful.
Flor Rosales: My Childhood Memories of Venezuela
Ruta Kaikariene: Fixing Cars with Dad
When I was a child, I used to go to a garage with my father where he used to keep his car. The car was old and often broken. My father used to repair it or just double-check the oil or other parts of the vehicle. I used to watch how he was working and was happy to pass to him the tools that he needed. Also, I used to sort screws and other small things into different boxes and to manage them in my way.
Doris Belky Gonzalez: Pot Rides
In Colombia, in the warm cities and towns on weekends or holidays, Pot Rides are usually done. It is very common in December 25 and January 1. Families gather at the riverbank, while they bathe and freshen up in its waters. Some adults take care of the children while they play, others are placing the pot. They carry coal and they build a stove with sticks, where to put the pot, right there they peel potatoes, cassava, green bananas and carry the chicken or hen ready to add to the pot. And it makes a delicious sancocho. While everything in the pot is cooking, everyone goes to the river to enjoy the water and the game until lunch is ready. However it is required to take some important care, because sometimes rivers can suddenly grow. And this is very dangerous. Locals already know this, and always as soon as they arrive, nailed a long stick with a flag at a certain distance from the river. If the water comes up to the rod, it is a sign that you have to leave the river immediately. So the Pot Ride is over for that day.
Angela Arias: Childhood Memories
I was born and raised in the Dominican Republic. I have a very big family. I have five brothers and four sisters. My parents’ home was next to my grandmother’s house and my two uncles also lived close by. I would play with my siblings and my cousins everyday. I waited for Sundays very excited because every Sunday we had a family reunion and all my cousins would come. We would all play in my grandmother’s house. We played many different games like volleyball, baseball, and hide-and-seek. Sunday was always a very fun day. We also had a farm with many animals including cows, horses, goats, hens, ducks, turkeys, and pigs. There were many flowers and trees with many fruits, like watermelon, sugarcane, oranges, mangoes, bananas, tamarinds, and pineapples. My sisters and I liked to sew on my mother’s sewing machine. My parents gave me a very good education. Most of my siblings were older than me so they loved me very much since I was their youngest little sister. I had a very happy childhood.
Tijaniya Amirah Binta Gangue: My Childhood!
My name is Tijaniya. I was born in Brooklyn, New York in 1997. When I was four years old, my family decided to move to Senegal in west Africa in the town named Dakar. Dakar is the capital of Senegal and is very crowded. I spent all my childhood there. At the same age, I started going to kindergarten. I was so excited to go to school even if it was to prepare for primary school. I met new friends but I didn’t speak the same language that they spoke “WOLOF and FRENCH'’ because I just spoke English at the beginning; it was a little bit embarrassing but it wasn’t nothing for me. After a few days I started catching some words. My teacher, Mrs. Rokhaya, was helping me to learn FRENCH and WOLOF quickly. She was so nice and so kind. I admired her so much. The weekend after school, my mum, my sisters and I went to the zoo park to visit animals. There were so many animals inside the park named  “LE PARC DE HANN” like lions, monkeys, hyena, tiger, porcupine, snake and much more. It was so funny and I really enjoyed it. We also went to ‘’GOREE ISLAND’’ and we visited the whole island including the House of Slaves. It was really sad to see that. After a few weeks my mum went back to the United States, my sisters and I stayed in Dakar with my aunt. A few months later, I completely forgot English so far, just wolof and french. Senegal is the best country in the west Africa.
NGN Awbartha: Childhood Memories
My name is NGN AWBARTHA from Burma. I was born to a peasant farmer family in middle Burma in May 12,1985. I have a big family, with seventh brothers and sisters. I'm the 5th child.

When I was a child, I had little opportunity to have play time because my big family was struggling for food. I wanted to go to school when I saw some friends were going to school, but my parents could not afford to pay school fees. In 1988, 3 years after I was born, Burmese people started to protest against the military government for democracy. The military government shot down the protesters. Therefore, the campaign between the protesters and the military government could not end until 2012. The economy in Burma got sanctions by foreign countries and became worse and worse. At the time I was 3 years old, getting food was becoming harder for my family. Sometimes we ate little plain rice, sometimes we ate the foods that fed cows and pigs. Sometimes, we found the food in the garbage to eat, and sometimes, no food to eat.
​
When I was 8 years old, one day my friend asked me to follow him to go to a Buddhist monastery. I accepted his suggestion, and we went to the monastery. The chief abbot in the monastery shared his foods with all pupils including me, after he had eaten. On that day I was happy. The next day I went to the monastery again. The chief abbot accepted me as his pupil, fed me some food, and started to teach me monastic education. In 1998, the chief abbot sent me to the capital city of Burma called Rangoon to learn monastic education for further study. This is the true story of childhood. Therefore, my childhood was not easy like the others. That’s why I have decided that one day I’ll help the poor.
Dennisse Croillo: MY CHILDHOOD :)
Kyaw Myint Aung Myanmar: Friends of Myanmar
I used to play football every evening when I was ten years old. I had many friends in the street. We went to school together and after we came back, we played football on the street. At raining time, I played football on the street and I was happier than other times. I wanted to be a football player in my country and also all of my friends. I loved and enjoyed football.

I used to learn Myanmar traditional boxing every weekend when I was twelve years old. At the training time I fought with my friend under the control of my boxing teacher. I wanted to improve my fighting skill and I wanted to be a champion of Myanmar boxing. I wanted to protect myself and my family so I tried to learn hard. 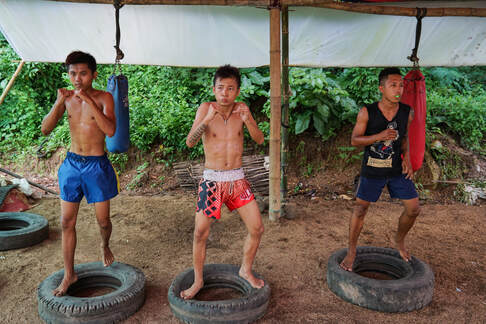